What to expect in the next 2-3 months

Inasmuch as we’d hoped to have some really good news to share with you by now, there are still many things that we’ve promised that hasn’t been delivered. The most crucial parts are of course home automation, notifications and improved Wi-Fi performance.

We’re expecting to release a new firmware to our beta/dev backers this week to have them test the new Wi-Fi drivers and if it works well, we expect to be releasing it to everyone as a beta firmware the following week. This firmware will improve the Wi-Fi performance and it’ll also fix the issue some are having with garbled data over the WAN port.

In addition to that, we anticipate to release mobile app notifications by the latter half of December. We’ve included a couple of screenshots below of how it’s been implemented, but we’ll be providing more details on our blog in a week or two as to how it all works. 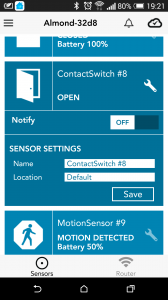 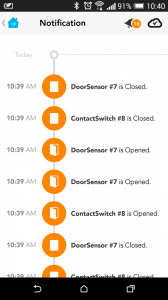 The progress of the automation end of things is progressing quite well and we’ll have a simple to use web-based interface that runs on the Almond+ itself. As such, the automation will run even in the event the internet goes down. We’ll be providing more details on this in January, as the UI still requires some work.

There’s still a lot more to come and we know we have plenty of work ahead of us, but the next couple of firmware releases should deliver much more of the core functionality. Also, if you haven’t already updated to firmware R069 which is available here, then we suggest you do so, as it’ll enable you to update to future firmwares via the LCD UI, although not beta releases.

Pre-order discount for US backers

If you’re interested in purchasing additional units and live in the US, today is your chance to get an Almond+ for $189. This offer is only available until 11.59pm EST, December 1st and we have limited quantities at this price. We’ll then offer the Almond+ for $199 for a limited period of time, with it then reverting back to its retail price of $249. We know some of you might think this is high compared to what you paid for your Kickstarter units, but keep in mind that we’ve made some pretty big hardware changes compared to the original plan. You can place your pre-order here http://goo.gl/MhWDvt and we expect to ship before the end of December.

For those who don’t live in the US, we’ll be offering similar deals in other regions once we launch there and we’ll provide more details and and when this happens. We were hoping to launch in more regions simultaneously, but sadly this simply wasn’t possible, but we’re working hard on bringing the Almond+ to as many markets as possible, as soon as possible.

In the US we’re offering the Almond for $69.99 on Amazon, today only and it’ll of course ship straight away. The order link you need for that offer is http://goo.gl/QZyjZv and it’ll start from 12.40pm EST and will be available until the end of the day, or until we run out of stock, whichever comes first.

We have specials in Canada, the UK and Germany for the Almond as well over the coming weeks, so keep your eyes out for these if you’re interested in getting an Almond. We’ll let you know via Twitter and Facebook once these deals go live.